GrowthBot And The Promise Of Easier Marketing

As part of a terrific keynote at INBOUND16, HubSpot’s chief tech guru Dharmesh Shah formally unveiled the GrowthBot. Dubbed a “marketer’s best friend,” GrowthBot is an ambitious piece of artificial intelligence clad in blazing HubSpot orange. The utility of this thing, as you can see in Dharmesh’s talk beginning around the 56:48 marker, was downright astounding.

We’re all looking for technology that makes our lives easier as marketers, and GrowthBot promises to do just that. But what is this brilliant piece of code, and is it ready for primetime?

GrowthBot seeks to automate the grunt work that comes with living a marketer’s life. That includes things like pulling your site’s referral traffic for December 2015, scoping out the keywords your competitor ranks for and finding a witty joke to impress your team with. This is the work that takes you out of your flow and burns through time that could be better used on larger initiatives and more impactful projects.

The utility of this tool is that it’s available 24/7, does not need to be downloaded, and utilizes natural language. It’s available right now for Slack, Facebook Messenger, and Twitter, so you can pepper the bot with questions with your friends and (maybe a little more creepily) on your own in Twitter direct messages. That means you can ask it to send you last month’s Flenderman report by saying something along the lines of “yo GrowthBot lemme get that October Flenderman report,” which is a victory for all of us. The potential has us immensely excited.

It’s still in the beta stages—more on that in a moment—but GrowthBot has the ability to connect to HubSpot and Google Analytics, potentially making pulling reports and important data a snap. We weren’t able to access that functionality just yet, but we’ll let you know when we can. From everything we’ve heard, it’s as smooth and instantaneous as you’d expect.

So GrowthBot is an exciting piece of code with the potential to streamline everything we do. How’s it doing right now?

As useful as it promises to be, at the time of this writing, GrowthBot has genuine limitations. If you ask it to perform a random action, for example, which comes as the last option on the suggested actions menu, it will loop that menu back to you. 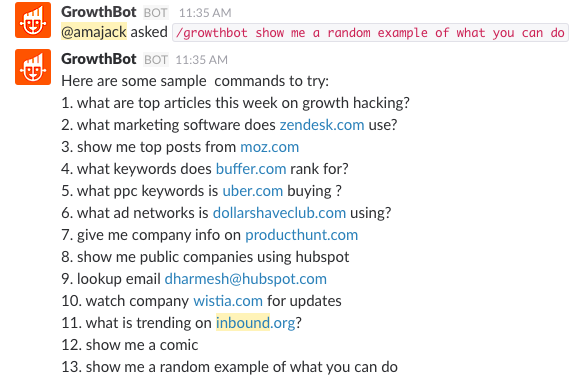 We did test the bounds of Growthbot by asking it, for example, to get us a beer and tell us how it was doing, but we’re just not there yet:

That’s not to say that GrowthBot is not useful. It was able to deliver us competitor info, including ranking keywords, and to answer the occasional far-flung inquiry about a business topic we were curious about. The integration with HubSpot and Google Analytics promises to deliver immediate value, as well.

We did find success when we peppered it with movie and play quotes, a subject GrowthBot is well-versed in. To wit: 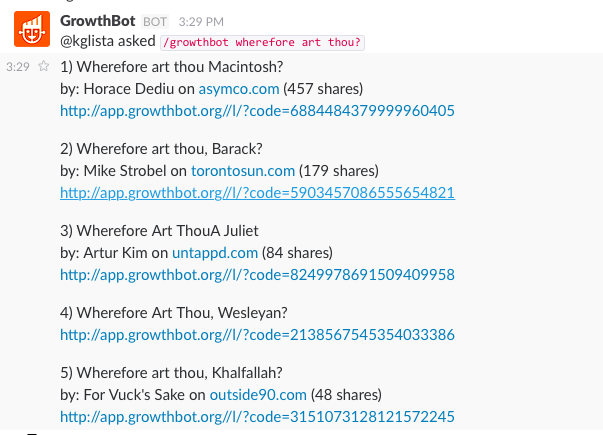 Sometimes it gave us really detailed answers that we were tickled to share with Dharmesh:

I love it when an @AskGrowthBot response makes me smile. https://t.co/IEddZo45pk

And noooo, GrowthBot, please no spoilers:

Ultimately, what we’re looking at is something with the immense potential to enhance our daily lives as marketers, even during those downtimes when we’re just trying to amuse one another. The fact that it isn’t quite there yet as a solution for every marketing and sales woe does nothing to dampen our enthusiasm for what it will be, and we’d definitely encourage you to start using it on every platform you can find it see its progress.

How To Start A Business Podcast